The body of Cafe Coffee Day owner VG Siddharth has been found on the banks of the Netravati River on 31 July 2019. Since his disappearance by the police administration, a campaign was conducted on a war footing to find him.

Nearly 200 people, including policemen, Coast Guard, divers and fishermen were engaged in research in the area of ​​the river where Siddharth was suspected to have jumped.

A letter from VG Siddharth, the founder and owner of Café Coffee Day was revealed. VG Siddharth wrote this letter to the employees. Siddharth has said in the letter that every financial transaction is my responsibility and I am only accountable to the law. 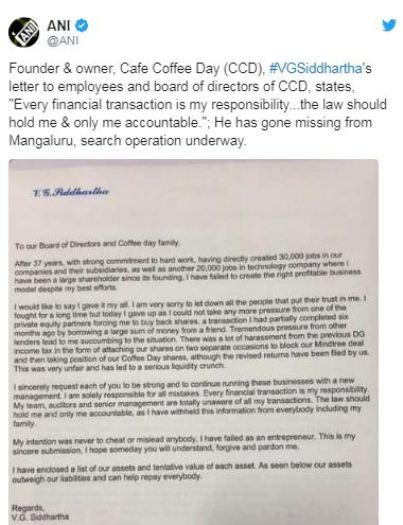 People started coming to Bengaluru residence only after the news of the disappearance of VG Siddharth, son-in-law of former Karnataka Chief Minister SM Krishna. Karnataka Chief Minister BS Yeddyurappa reached SM Krishna’s residence soon after getting information about the incident. The entire family is upset over his sudden disappearance. He is missing from the time when he was going to Mangaluru.

Did you like the article? So also watch the video!

VG Siddharth was an Indian businessman from the state of Karnataka. He is particularly known as the founder of the Café Coffee Day Chain. He married the daughter of former Karnataka Chief Minister SM Krishna. He started his career from Mumbai’s JM Financial Ltd. after studying post graduation.

Siddharth established Global Technology Ventures Limited in the year 2000. He also started the Cafe Coffee Day chain with him. He is also credited with making Chikmagaluru’s coffee popular in the world.

Get All Latest Notification of Government Jobs, Results, Admit Card, Answer Key & Educational Articles such as current affairs. https://JobsSarkariNaukri.com is an Indian website where Students/Job Seekers can find the latest Government Job & Result Notifications.  We also helps/motivates students to crack competitive exams.  We guide students on how to learn facts on their own, rather than teach them facts.