Congress leader and Rajya Sabha MP Sanjay Singh has recently resigned from his Rajya Sabha membership and party. Sanjay Singh contested the Lok Sabha elections 2019 from Sultanpur, where he had to face defeat in front of BJP’s Maneka Gandhi.

Sanjay Singh has resigned from the Rajya Sabha membership at a time when there is a debate on the ‘Triple Divorce’ bill presented by the government. They can join the Bharatiya Janata Party (BJP).

What did Sanjay Singh say after his resignation 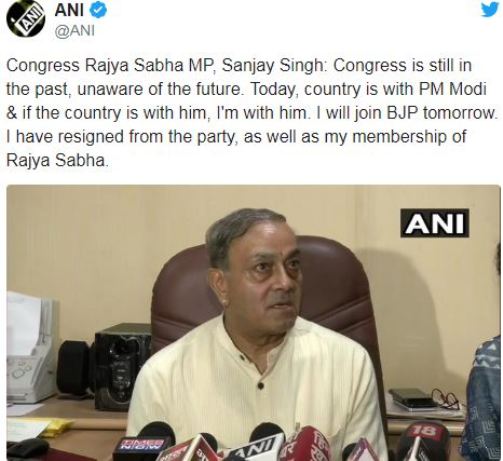 After the resignation, Sanjay Singh said that I am leaving the Congress because the Congress is unaware of the future. I support Prime Minister Narendra Modi because of ‘Sabka Saath Sabka Vikas’. The whole country is with Prime Minister Modi today. If the whole country is with them, then I am also with them. Tomorrow I will join BJP. Sanjay Singh said that I have resigned from the party and Rajya Sabha.

Did you like the article? So also watch the video!

• Sanjay Singh is considered very close to the Gandhi family. The Congress made Sanjay Singh a Rajya Sabha MP from Assam. In the year 1980, when the Congress decided to contest from Amethi, Sanjay Singh gave his support to Sanjay Gandhi.

• Sanjay Singh has already left the Congress once before. He was elected as a Member of Parliament from the Amethi Parliamentary seat in 1998 by defeating Congress Captain Satish Sharma. He was then Union Minister in the Atal Bihari Vajpayee government.

• He left the BJP and returned to the Congress after Rahul Gandhi joined the Congress. Sanjay Singh was elected as an MP from Sultapur seat in the 2009 Lok Sabha elections.

Get All Latest Notification of Government Jobs, Results, Admit Card, Answer Key & Educational Articles such as current affairs. https://JobsSarkariNaukri.com is an Indian website where Students/Job Seekers can find the latest Government Job & Result Notifications.  We also helps/motivates students to crack competitive exams.  We guide students on how to learn facts on their own, rather than teach them facts.